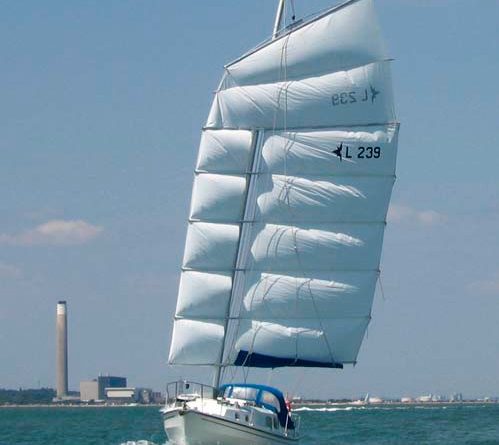 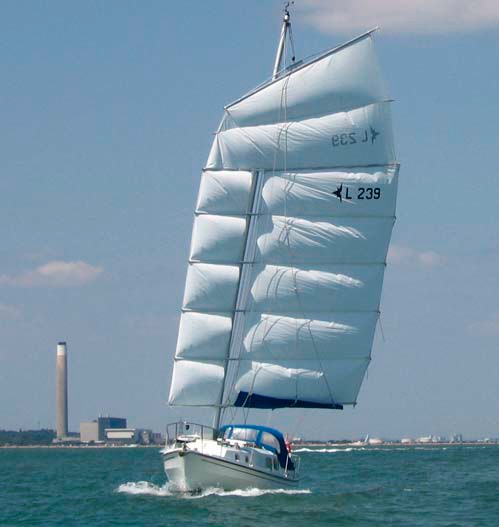 Back in 2002, AYRS Member Slieve MacGalliard was looking for a way to improve the one weak point of the modern western Junk rig – the windward performance. His conclusion was that camber is needed right to the luff of the sail, a feature that is difficult to achieve with the standard rig, which is normally pulled aft. One possible idea was to build a cambered rig with a lot of sail balance forward of the mast and split the sail in way of the mast so that the camber would be the same on both tacks and not distorted by the mast.

The initial idea was to try the rig on a Mirror dinghy, but when a rather neglected 31ft Westerly Longbow with tired rig (now named Poppy) became available the project grew bigger. Needlespar made the basic mast and step, and Sunbird Marine provided the partners and completed the installation. Slieve made all the rest of the rig. The split sail was home made in 3 sections of 6oz Terylene, and is 515 sq.ft (47.5 sq.m), the same area as the Bermudan rig mainsail and 135% genoa. The following notes represent his thoughts on the results.

Starting with Close-hauled in smooth seas, Poppy should sail at about the same speed as her Bermudan sister, or not more than 2% slower, but in practice she has not yet met smooth water when beating. In her local sailing area in the Solent, passage making is always done with the tide, so that beating is always done in a wind over tide situation giving Close-hauled in Choppy seas. Under these conditions the unstayed mast has an effect that tends to reduce the pitching moment of the boat. Where a Bermudan boat with fore and back stays will dig its bows into the chop helped by the inertia of the mast, the unstayed mast will flex and let the bow rise and ease its way over the chop giving a smoother ride with less spray. In these conditions Poppy would appear to be 1 or 2% faster than her sister boat.

When Tacking from Close-hauled to close-hauled the split junk rig is very good. On a Bermudan boat the long leech of the headsail will flap as the boat heads above close-hauled and will slow the boat until the sails are filled on the other tack. With the split junk the short leeches of the ‘jibs’ do not have the same drag and do not significantly slow the boat as it heads up so that it is possible to take your time during the manoeuvre. As the rig is self-tacking there is no risk of being taken aback and forced onto either tack, and when the boat reaches the new close-hauled heading for the sheet setting the rig immediately develops full drive. There is no need to bear away to accelerate before luffing back up onto the new course.

The project is a success, but space precludes a full report on this page. Fuller details will be found in AYRS’ Journal, Catalyst, Issue No 37, which may be downloaded or obtained from the Society.