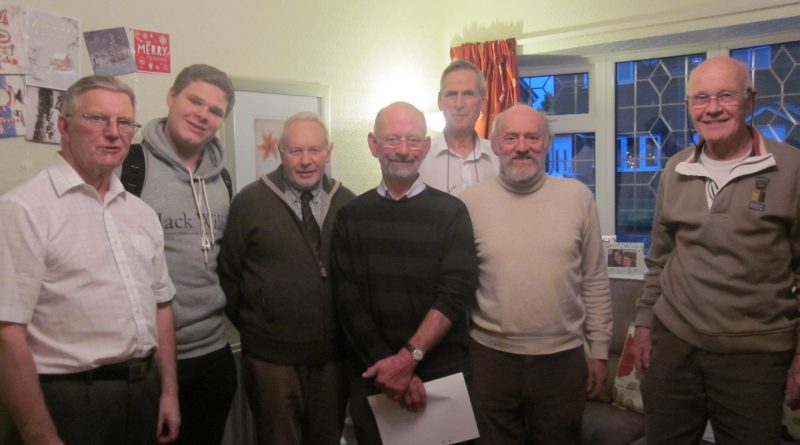 As is now the custom at our Winter Meeting, members arrived just after noon for a 12.30 pm start. There were seven members and four of their wives present. Three apologies from absence were received from Roy Anderson, Steve McKenna and Colin Weir. After a short introduction, a Buffet Lunch was served which was enjoyed by everyone (thanks Col). Amply fed and watered, the Ladies retired to the conservatory leaving the Gents in the lounge to have their ‘official’ meeting.

Mike Howard informed the meeting that the North West Local Group would be hosting a stand and pontoon at the 2017 Northern Boat Show, which was being held on the 23rd, 24th and 25th of June, to coincide with the Merseyside International River Festival. Mike asked for comments and ideas from the floor.

John Shuttleworth suggested that if we intended to concentrate on recruitment, we should take time to try and analyse who is our target audience. Another suggestion was that Colin McCowen’s Water Feature be used again as it proved to be a good ‘crowd puller’. Mike suggested the pump be turned ninety degrees to make it easier for small children to operate it, which Colin acknowledged. Another idea was that we build a simple CORREX boat on the stand and then demonstrate it in the water.

With a pontoon berth to fill, Adrian Denye offered his Post Boat. Adrian stated that his boat had several alternative mast positions and if anyone had a Wing Sail he would gladly offer his hull for trials. Colin said he was developing a Wing Sail but wanted to mount it on his outrigger canoe. Mike said he had three CORREX boats and was hoping to build a couple more early next year. Mike suggested that if members send him their thoughts on e-mail. He would call a special ‘Boat Show’ meeting to discuss ideas and formulate a plan of action.

Mike then made a short presentation on TRANSONIC HULLS. Alberto Calderon, the Inventor had had a distinguished career in Aeronautical Engineering, being involved in the design of the F1-11B fighter, the Concorde ands with Airbus. He spent two years working as the Chief Designer for Dennis Connors in two successive America’s Cup Challenges. He was tasked with investigating how to mitigate shock loads from wave impact.

This led him to prove that maximum hull speed in displacement hulls only conforms to Froude’s Theory if the hulls were of ‘conventional form’. He then investigated unconventional hull forms which did not generate bow, stern or quarter waves and were therefore not restricted to the speed limitations as defined by Froude. Using his extensive aeronautical knowledge he developed the Transonic Hull. He holds several US Patents for his designs. However, the hull shape he developed fell outside the parameters of the America’s Cup Rules.

Mike passed around two card models that he had made. He explained that Calderon saw the future of his design in the Stealth Incursion Boat (US Navy Seals) and the Fast Crew/Supply Boat market. Mike explained that the latter craft operated at around twenty-five to thirty knots and were used to transport crews to and from offshore oil and gas installations, principally offshore USA/Gulf of Mexico and in the Middle and Far East.

Calderon’s design has a wave piercing bow and maximum beam at the transom. It has a deeply immersed bow with the transom just touching the water. The tapers of both the sides and the keel are critical in producing the Transonic Hull. Calderon has stated that his Transonic Hull shows 17% less fuel consumption for the same speed and could operate in significantly higher waves at maximum speed, compared with conventionally hulled Fast Crew Boats. Mike directed his audience to look on the Internet for more detailed information (transonic hull). 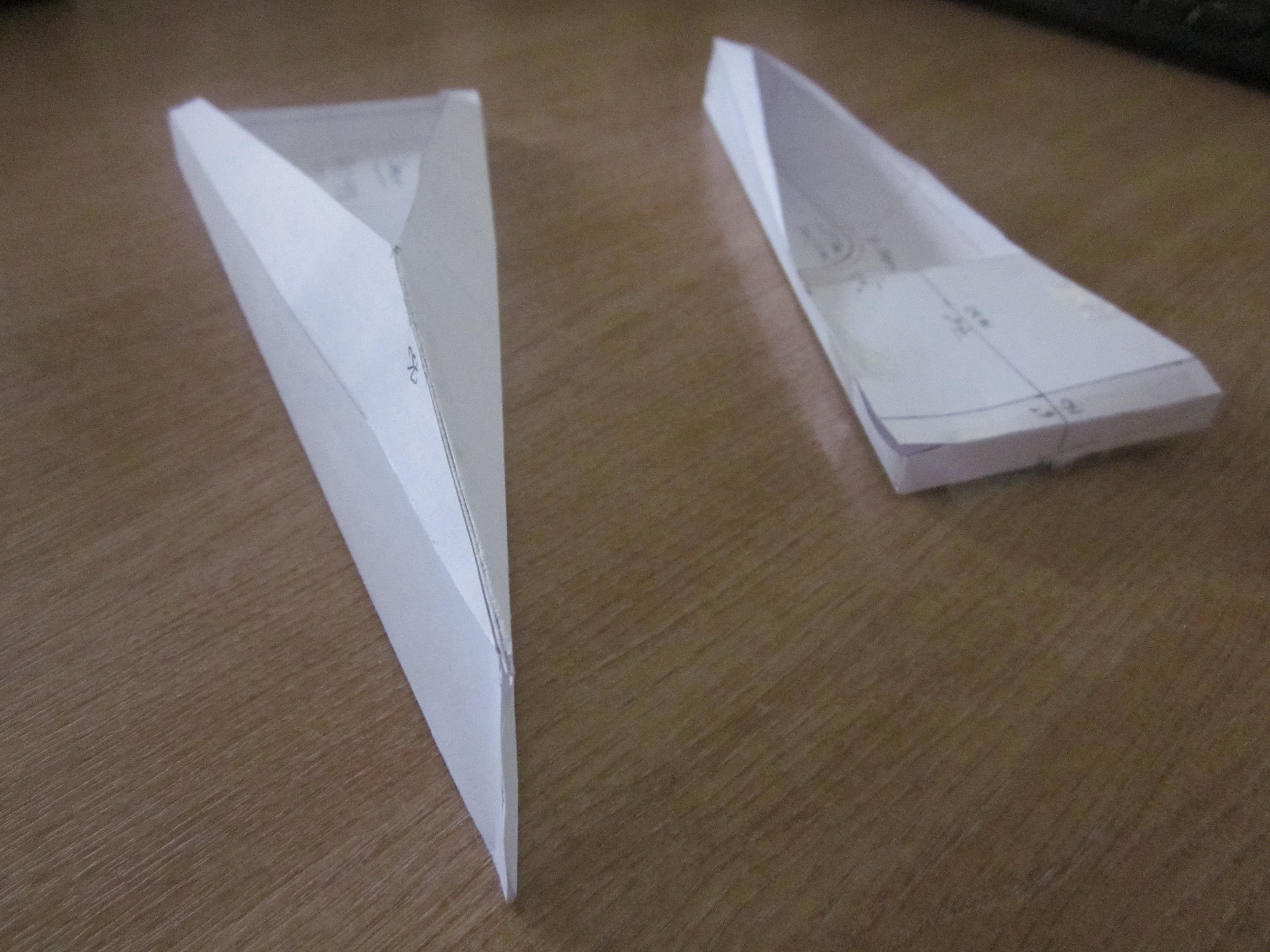 There was some scepticism about the Transonic Hull’s ability to not make waves when operating at high speed. James pointed out that the hull shape of the Transonic Hull was reminiscent of the Ocean 60’s and Ocean 72’s sailing yachts which raced around the World. Mike stated that Calderon had carried out water borne trials with a two metre long radio controlled model and a 5 metre long manned demonstrator boat. He had also carried out independent comparative trials of a Transonic hulled 56 metre Crew Boat versus the Axe Bow and Very Slim Vessel (VSV) of a similar size and displacement in the Test Tank belonging to The National Research Council of Canada’s Institute of Ocean Technology.

John Alldred said that due to personal circumstances he would be ‘out of action’ for at least three months and could not make any commitment to such a project at this time. Mike suggested that he might build a CORREX Transonic Hull as a possible challenger. John Shuttleworth thought that such a hull would have too much drag and John Alldred stated that the flat bottom would not be an ideal feature in Correx. Mike pointed out that a three metre long hull would have a beam at the transom of 0.75 metres and would probably require outriggers to create stability. The bottom could be creased to provide bottom panels having a smaller flat area.

Three separate areas of discussion emanated from this one subject. The point was made that good publicity could be gained from putting a video onto YouTube, but did anyone know how to do this? James stated that he could take a digital video and put it onto YouTube. There was a visible sigh of relief from the less computer literate members present.

Adrian suggested that the NWLG investigate ‘long forgotten’ hull shapes in the 5 to 10 metre length range to see if, using modern materials, they could be resurrected. The meeting absorbed the idea without further comment.

This led onto a discussion about using a local canal as a test tank for hull shapes. Adrian suggested a simple trailer equipped with a telescopic boom and a calibrated winch fitted with ‘electronic gadgetry’ to measure speed and resistance. James was encouraged to participate but he said he had no electronics experience. John Alldred stated he had experimented with a simple open source device known by the name of ARDUINO. This was a micro-processor which could be programmed to input information from sensors to control eternal devices.

A few quiet moments led Mike to expound on the use of Builder’s under floor insulation foam sheets to make boats. The blue closed cell foam sheets are stuck together with PVA adhesive and then ‘carved’ into shape. A thin layer of glass mat and resin were then applied to give a homogeneous surface. Much discussion ensued as to whether the foam was closed cell and if so, the purpose of adding heavy GRP laminate to an otherwise lightweight hull. The consensus was that the GRP layer provided impact resistance.

The meeting ended around 4.00 pm on a much lighter note with Colin offering everyone information about a YouTube video by Ricky Gervais entitled NOAH (Ricky Gervais – Noah’s Ark – YouTube). ‘”Well it is about a boat!” he exclaimed!.

2016 has been another successful year for the North West Local Group. We have held four meetings and an outing to Manley Mere. We participated in the Northern Boat Show, where we recruited eleven new members into the Society. Several of our members continue to develop their own pet projects, FLIP FLOP Powering Device, Wing Sail, a Kite Powered Canoe and Correx boats, with the help and encouragement of the other members of our Group. We look forward to an interesting and active 2017.