Tom Potts described his ideas for generating power from the wind and from river or tidal currents and a general discussion followed on from this.

These ideas originated from articles by Ken Upton that were previously published in Catalyst.  I suppose the basic idea is that windmills and watermills do not have to be based on taking power from rotary motion about an axis – you could have aerofoils or hydrofoils following any trajectory through the fluid. 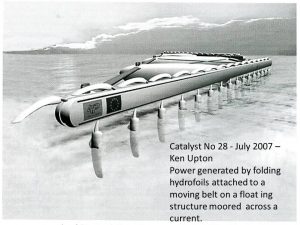 The picture above is from Ken Upton’s orginal article – a moving belt spans a river with hydrofoils attached to the belt dipping into the water as they cross the river in one direction, then folding over to be retracted from the water on the return direction.  The principle could be applied in many ways. Tom sugested that, for example, a ski lift could carry sails instead of, or in addition to, passengers, and so could in principle generate electricity rather than consuming it.    Tom pointed out the potential cost advantage of fabric sails over ridgid windmill blades and sugested that, for example, sails could be mounted from cables running over pulleys between two chimneys on a house roof, or even between fence posts.

John Perry followed Tom’s presentation with a few slides showing the advantage that any any such device would gain from being made tall – he showed a graph, as below, derived from a formula for the natural wind gradient as given in Wikipedia.  This sugests that a wind power device of given size could provide several times more power if mounted at 50m above the surface than if mounted at 10m above the surface. However, there are some uncertainties in such calculations – the state of the atmosphere and the nature of the terrain both have quite a large effect on the wind gradient.  John continued to show pictures of some commercial  projects that use non rotary motion to generate wind power. For example, schemes in which kites are controlled to rise and fall, power being taken from the winch drums that carry the kite lines.

Click here for a link to the recording of the meeting