Following a query during November's meeting, I will report here on my (very slow) progress on my main project, "Insert Hull Here", a frame with hinged Bruce foil. It is intended to contain all the forces generated by the rig and the underwater appendages within the frame, so that the hull only has to provide buoyancy. In theory, it should be possible to attach any hull that has not too much drag in the intended speed range, and has gunwales that are strong enough.

On the lee tack (the foil is to lee), the Bruce foil pushes up. On the weather tack, it acts like the hinged foil first proposed by Hagedoorn, and also advocated by Giles Whittaker. That is, when the foil goes over a wave on the weather tack, a rigidly connected Bruce foiler to has to overcome the roll inertia of the whole boat in order to stay in the water. The hinged foil only has to overcome the roll inertia of itself and the beam up to the hinge, and the rest of the boat can follow later. That generally gives away some righting moment, which has to be made up some other way, for the sake of the foil staying hooked in.

Note that when the boat is on the lee tack, what matters is how high the intersection between weight and foil force is relative to sail force. In the figure below, that distance is 0, meaning the boat does not heel on the lee tack.

When the boat is on the weather tack, what matters is how high the intersection between hull buoyancy and foil force is relative to the sail. Here, there is some lever arm left, though only about 40% of what it would be when using only conventional underwater appendages, But because the foil does not fully balance sail force, some righting moment has to be generated the conventional way.

The forward beam of the frame is laminated. It has some time-consuming fiddly bits, like the mast partner, and the hinge that has to fit the rear beam fairly precisely:
https://www.flickr.com/photos/78112151@ ... ed-public/

I have barely started on the foil. I have made some ribs out of 18mm plywood. The plan is to lay up biaxial carbon, and some unidirectional, on the inside of 2mm plywood, epoxy, screw ribs on the ends of the foil, and a nose piece. Insert a foam and biaxial carbon shear web, insert foam ribs, let the epoxy set enough that it sticks to the plywood. Then epoxy the remaining carbon to the second sheet of ply, turn over, and attach the second sheet to the rest. The ply is intended to serve only as a mold that I don't bother to remove. That is why I plan to use very thin ply.

I currently plan to use a 3 metre ladder for the beam from hinge to foil. If anyone has reason to believe that is a bad idea, please tell me. And building the hinge will involve some time-consuming fiddly bits, and I have not quite worked out how they should look. If the hinge were parallel to the longitudinal axis, and horizontal, I could just extend the ladder a bit. But I want the hinge axis to toe in a bit and be lower forward. That makes the foil toe out and pitch down when the boat heels on the weather tack. Giles Whittaker explained in Catalyst. But that means when I extend the foot of the ladder with the bits that form the hinge, those bits have to bend so that they are perpendicular to the hinge axis.
Last edited by Robert Biegler on Wed Dec 07, 2022 10:02 pm, edited 1 time in total.
Top

The boat is finished. All that remains to be done is set up the running rigging, and wait for the beginning of the sailing season, in about half a year

Here you can see the boat with the frame tied to the hull, and the foil and beam upside down besides it. I can probably cut off the last two rungs of the ladder, but before I decide, I want to try different foil positions. 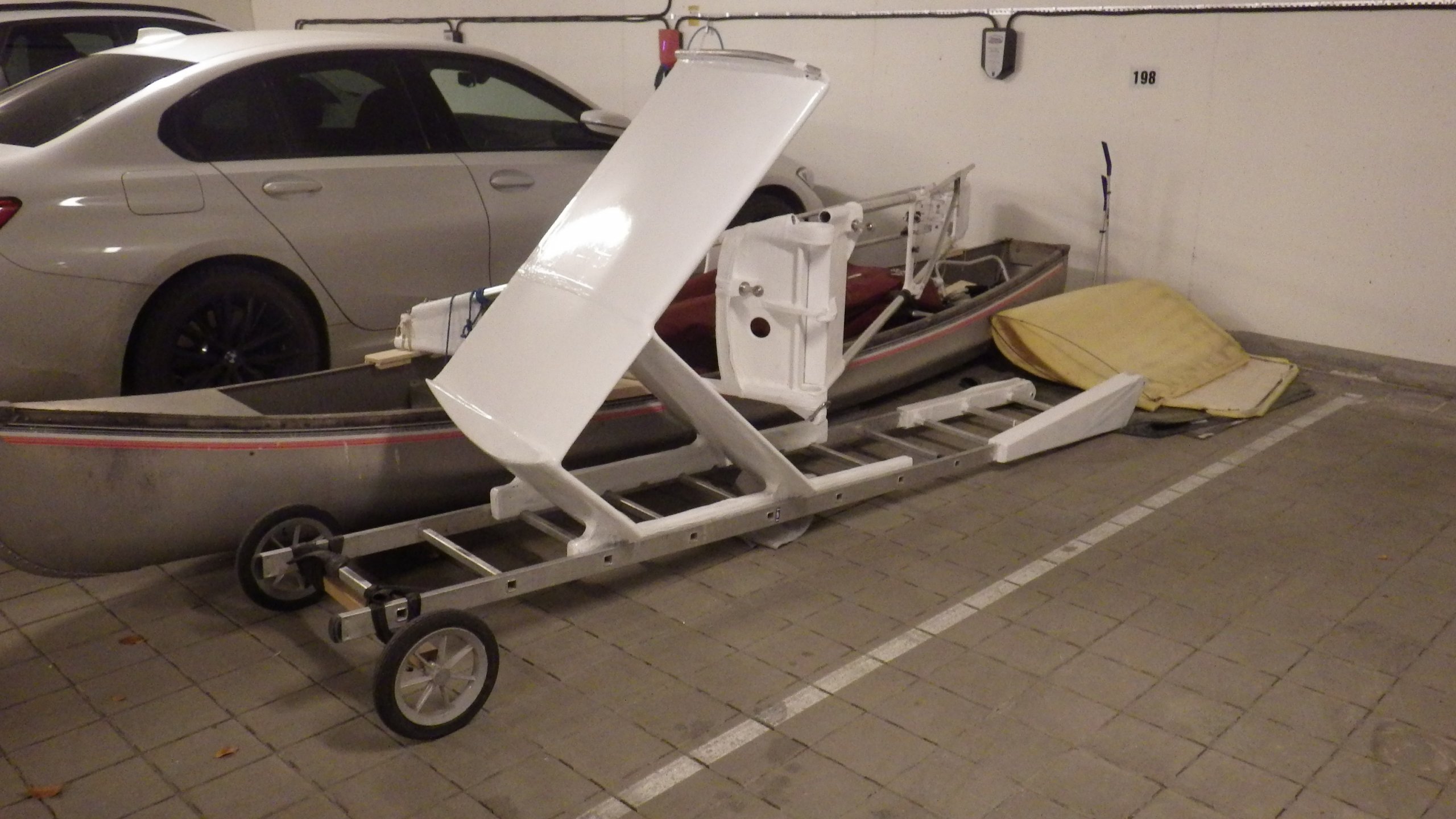 I know the foil is rather large. The intention is that even when stalled, the foil should grip the water enough to keep the boat upright with the foil to weather.
Top

Robert - I have just noticed your thread here - it looks to be very intersting experiment. I am surprised that no-one else (to my knowledge, such as that is) has tried to develop the Giles Whittaker hinged foil. I would say that from the films Giles produced a good few years ago now, the idea did work amazingly well, at least in model form. It really did look like an uncapsizeable multihull!

Its not completely clear to me, but my interpretation of your diagrams is that on the 'Lee tack' the arm supporting the hinge for the 'foil arm' is locked, so the system operates much like Gerald Holtom's foiling boats. Then you unlock the hinge as your tack?

From my mental picture of Giles models, I think he had the ratio of the length of the pivoting assembly to the overal beam rather smaller than you have it, in other words, he placed the hinge nearer the foil and further from the hull. Doing that would improve the righting moment and it did look as though the righting moment from the foil fully balanced the sail heeling moment in Giles's models, although this did require a large overal beam.

Best wishes for this project!
Top

John Perry wrote: ↑
Thu Dec 08, 2022 9:35 pm
my interpretation of your diagrams is that on the 'Lee tack' the arm supporting the hinge for the 'foil arm' is locked, so the system operates much like Gerald Holtom's foiling boats. Then you unlock the hinge as your tack?

Yes. The figure in the first post is inconsistent. On the left, I drew, in orange, a waterstay. I forgot to include that in the middle and on the right. That takes care of limiting rotation on the lee tack, but does let the foil swing down on the weather tack. The waterstay could be made adjustable. Then if the foil's lever arm becomes too long after reefing, pushing the foil out until leeway becomes excessive, slacking off the waterstay would angle the foil closer to vertical, and bring it back into the water.


John Perry wrote: ↑
Thu Dec 08, 2022 9:35 pm
From my mental picture of Giles models, I think he had the ratio of the length of the pivoting assembly to the overal beam rather smaller than you have it, in other words, he placed the hinge nearer the foil and further from the hull. Doing that would improve the righting moment and it did look as though the righting moment from the foil fully balanced the sail heeling moment in Giles's models

I am considering that, but there are two additional factors. One is that the more I move the hinge towards the foil, the more the foil heels as the boat heels. The foil would soon end up horizontal, and eventually heeled to the point where leeway pushes it up. In both the boat I built and in the drawing below, the hinge is far enough from the foil that the reversal will not happen. And even when the foil heels to near horizontal, the inclined hinge axis could still angle the foil so that it pulls down despite leeway no longer providing an angle of attack. However, with my present, simple foil, heeling the foil too far puts both struts in the water, and likely will cause lots of drag. A foil built of stronger and stiffer materials might be a simple hook, with only one part breaking the surface. Then moving the hinge further outboard towards the foil might be more practical. I have drawn that, and the drawing suggests a second relevant factor. 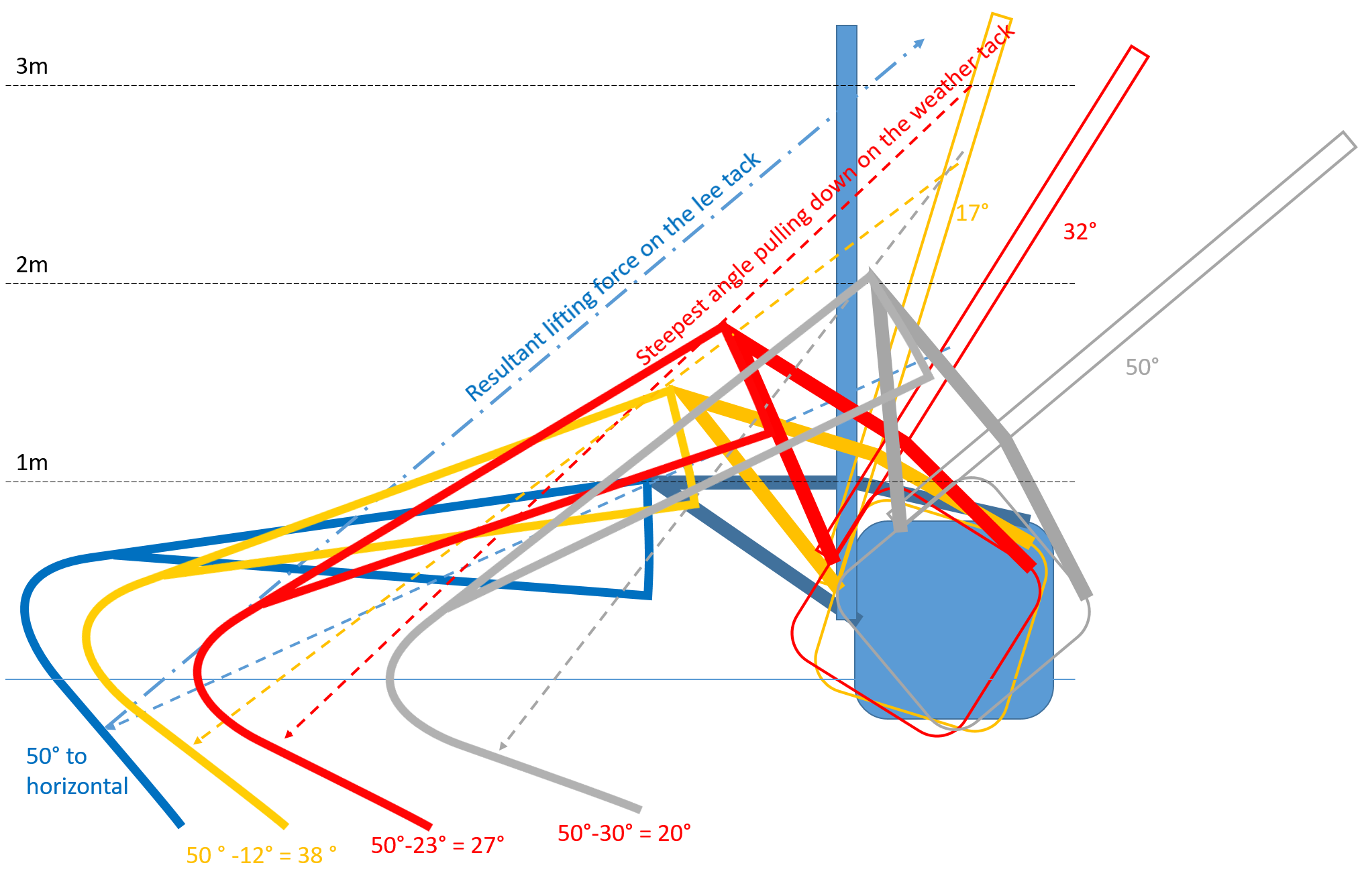 With the hinge position I have drawn, I get maximum righting moment at 32 degrees heel. The label in the drawing is wrong: the maximum righting moment comes from the longest lever arm, not steepest angle. I think (at least for hinge positions closer to the hull than the foil) the lever arm gets longest when the force from the foil is at a right angle to a line between hinge and centre of buoyancy. Beyond that, righting moment from the foil diminishes. The shorter the foil's beam, the smaller the heeling angle of maximum stability, and the easier it is to go beyond that when sailing upwind over a wave with the water dropping out from under the foil. But make it too short, as I did on my radio-controlled model, and the foil never gains enough leverage to balance the sail on its own. Gusts did heel the model to the point where the foil's lever arm decreased again.

(I took that picture before I had glued on to the hull and foil the attachment points for a waterstay.) 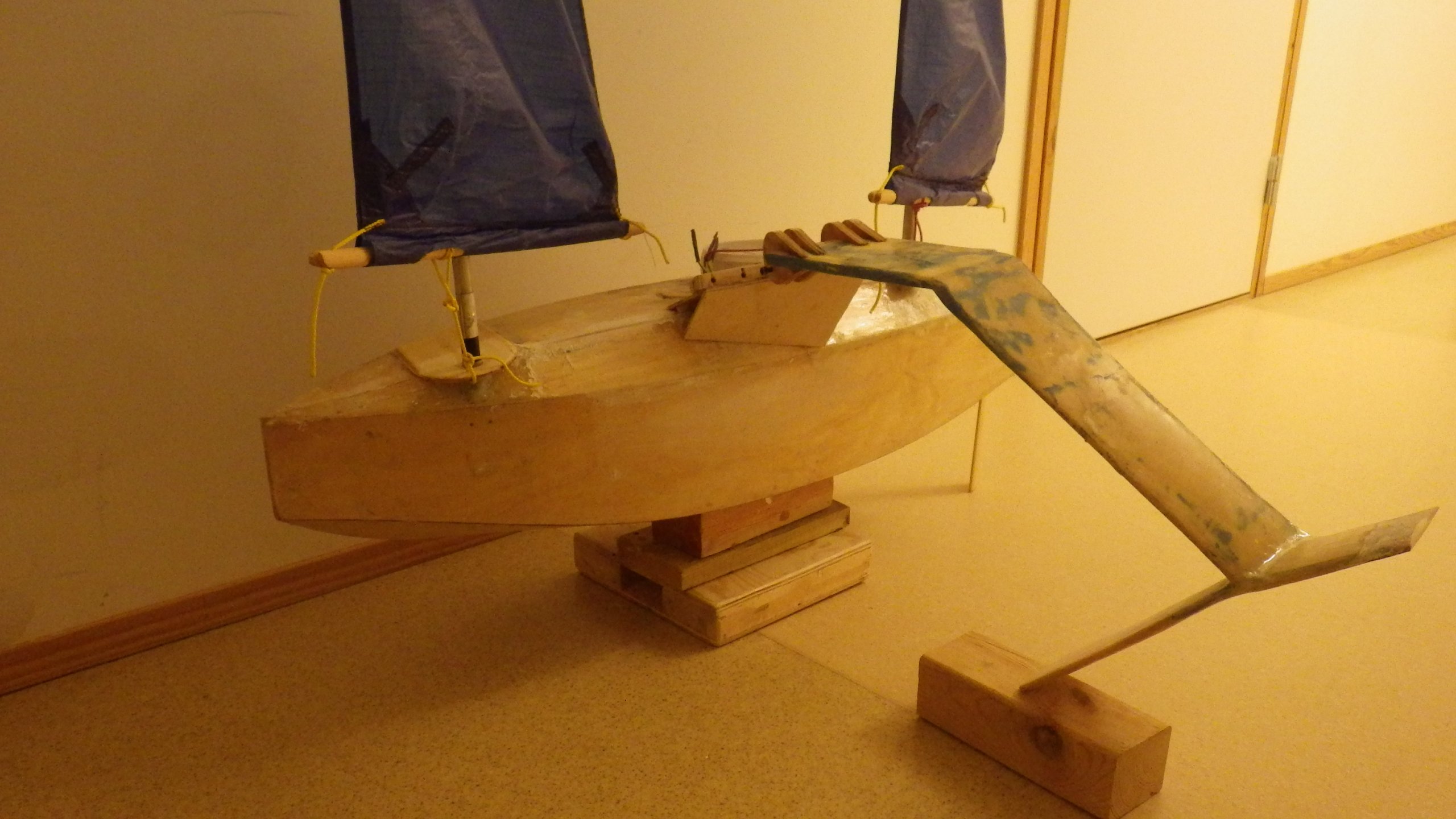 Also, if I ever scale up to a boat large enough to need a berth, I will need to reduce the in-harbour footprint to that of a monohull. I have an idea for that, but the folded beam will be from hinge to opposite gunwale, and that also limits how far out the hinge can be. So I want to see how this kind of design handles before I make any further decisions.

Finally, in building the frame that holds canoe hull, rig, rudder and foil together, I was also constrained by the lengths of the aluminium tubes that I had left over. I am re-using bits that were cluttering up my attic, reducing the impact on both the environment and my bank account.

Looked to be about five times as wide as long. He did not mention whether the models could be made to tack, and I never saw his videos. He mentioned having videos, but I didn't notice a link. And Youtube didn't even exist in 2003.
Top
Post Reply
4 posts • Page 1 of 1