Greetings from Sweden! This is my first post since I became a member of AYRS a few years ago.

I am building/designing a beachtri for the 2023 season, from parts I have collected through the years. The main components are: Center hull from an 70´s Sailcraft UK Tornado, a Marstrom Tornado mast, floats from a Nacra beachcat, a Nacra 18sqm main, a 5.35sqm Tornado jib. I built 3.2 m beams for a catamaran project a few years ago, but decided to use them for this larger project instead, by lengthening and reinforcing them. The other beam tubes are rests from a almost ready built small hydrofoil, that is due to sail this summer.

The main beam dolphin striker is of conventional type, like on the Tornado or any other beach catamaran. In an attempt to exclude a conventinal rear waterstay in line with the rear beam to minimize work on the Tornado hull, I got the idea of running a diagonal Dyneema DM20 waterstay from the rear beam ends, to the main beam striker band(40x3mm stainless) attached on each hull side(red).

To counteract the rear going force, another DM20 stay could then be attached from striker band to the ama forestay chainplate if needed(blue).

The forces are not large, but the rear beam could benefit from a little additional help, as I want want to add some security. Of course you loose ca 0.7 of the force due to the close to 45 degree angle.

I can not foresee all forces involved in this arrangement, nor the illeffects, so any thoughts on if this could work for the rear beam as suboptimal waterstays, would be greatly appreciated.

Hope the MSPaint-sketch is understandable. 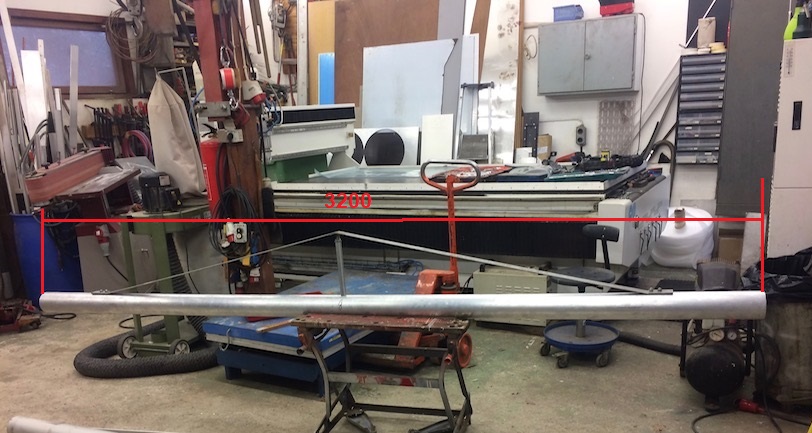 Re: Suboptimal waterstays for beach trimaran

Hi Lars, welcome to the AYRS and to this forum.

When your boat was a catamaran it (presumably) had the 3mm x 40mm stainless steel strap acting in tension to resist the downwards force on the forward beam from the mast foot but (presumably) there was no such structure to support the aft beam, nor was such structure needed for the aft beam since bending moments on that beam are smaller. Now you are making it into a trimaran you are probably increasing the overal beam, and hence the maximum righting moment available and this potentially increases the bending moment on the forward beam due that is due to loading from the mast foot, but I am not sure it makes a lot of difference to the bending moment that the aft beam will experience. Indeed, the addition of the centre hull should usefully stiffen the whole structure against torsional loading (i.e. loading that causes one float bow and the opposit float stern to go down while the other float bow and opposite float stern goes up). So, on that basis maybe you dont need any waterstay for the aft beam?

But if you do find you need waterstays for the aft beam then I think that the connections you show in red and blue would be a valid way to add the effect of aft beam waterstays. If you have the conncections shown in red then I think you will also need the ones shown in blue otherwise tension in the red conncetions will simply bend both beams in the horizontal plane.

It sounds an interesting project. I am wondering, what is your overal aim in converting a catamaran into a trimaran - is it to go faster by increasing the overal beam and hence available righting moment? Or is it to gain a centre hull to provide a place where crew can sit with better shelter than on the windward hull of a catamarn? Or maybe something else?

Re: Suboptimal waterstays for beach trimaran

Thanks for your answer, I am truly sorry for answering you so late.

I had two catamaran projects that came to a halt when my co owner left this world a few years ago.
Now I am building a little bigger boat with an open cockpit and a small outborder to sail alone, so the added RM is welcome. Besides that trapezing is not what I am looking forward to anymore at my age.

At the time I last posted, I was promised a Sail Craft Tornado hull for free, to use with the hulls from the smaller of the cat projects, but it did not happen. I also tried to sell my other slightly larger Nacra 5.8 project, but it didn´t succeed either. Instead I decided to reuse one of the 5.8 hulls, instead of the one foot longer Tornado hull. The other 5.8 hull will later be used for a lighter project, so it will not be wasted.

The beams are completely redesigned as the Nacra center hull does not lend itself to a cat-style stainless dolphinstriker. The main tri beam is now 106x3mm in the center, going down to 100x3mm and then 90x3mm at the end.

I have recently opened the decks to add fittings on both sides of the bulkhead under the main beam pocket for using synthetic waterstays. I have also cut up the foredeck for adding a chainplate at the left side for a small forestay bridle.

Back to my initial idea about my diagonal waterstays I decided to scrap it as it was it was a bad idea all together, as the shrouds will be connected to the amas chainplates and the outer end of the rear beam, by a bridle. This means a rear waterstay should rather go to the rear instead of forward to counteract the rig tension.

2nd image: Note the beam in the pocket is not the correct one, being the rear beam of a small foiler I am also working on. 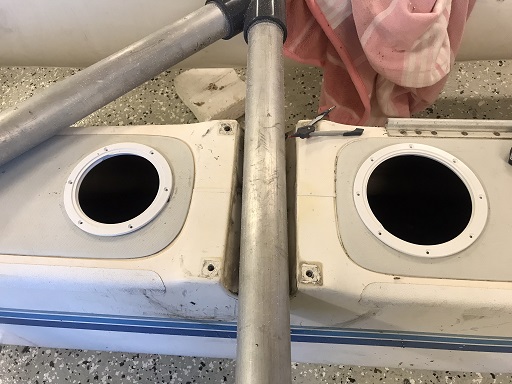 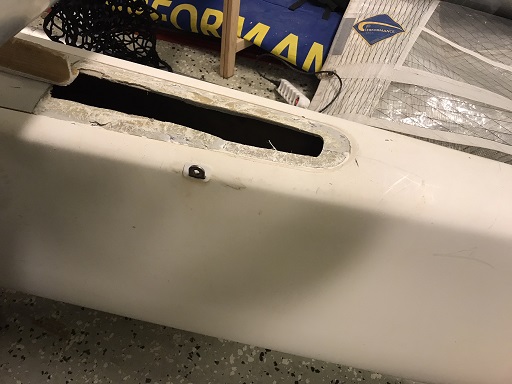