There is a Kickstarter project for a large foiler, intended to break offshore speed record, which can supposedly be scaled up for cargo transport: https://www.kickstarter.com/projects/v- ... sportation 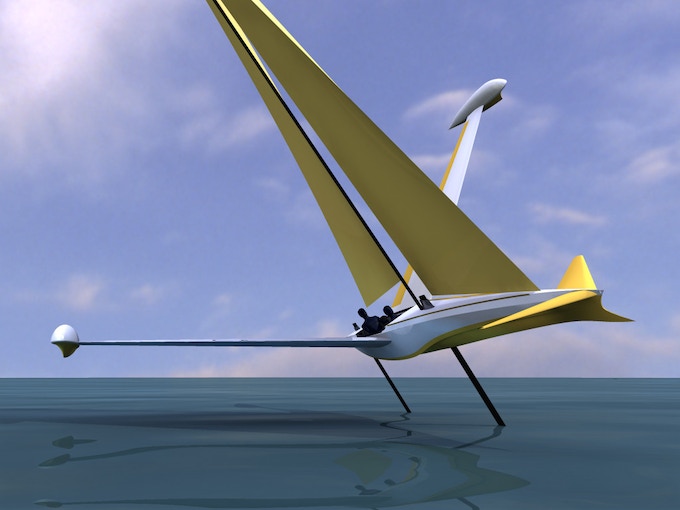 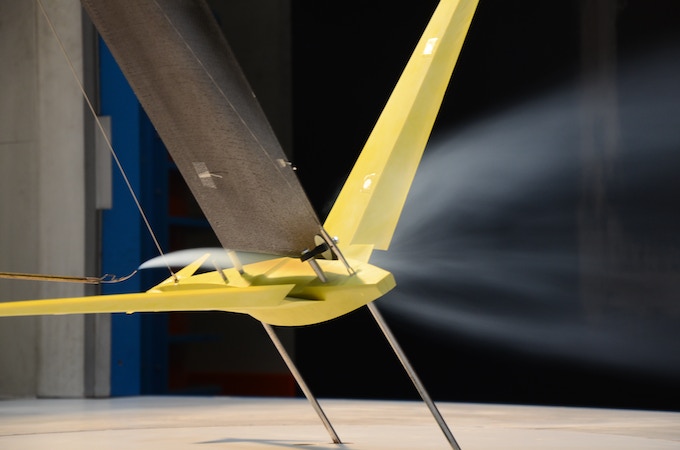 In the following, there either is a bit of salesmanship, or they mean the claimed uniqueness to apply only to the combinations of all parts of the statement: "In contrast to all other known sailing boats, V_REX leans to the windward side which converts sail pressure into propulsion and uses a ground effect wing for stabilization, which enables stable flight." Converting sail pressure into propulsion is what all sailing vessels do, no matter which way they heel. Windsurfers have been leaning to windward for decades, and foiling dinghies at least since Rohan Veal. Combining that with a wing in ground effect to get at least some stabilising feedback does seem to be new. I am guessing that most of the active control is through the flaps on those wings and by steering, with energy-intensive control of sheeting being a last resort. They don't explain that.

They also say: "The stabilizers are arranged in a V- shape at a 33° angle to the hull, with a 250 L water tank at the tip of each for water- ballast. Those tanks can be filled within a few seconds through a system known from firefighter planes. During maneuvers the water is routed from the leeward to the windward side through a pipe system."

In the time I was willing to invest, I couldn't find a description of how firefighter planes take on water. I guess it's ram pressure. If so, that needs speed, and if you want that weight to windward immediately, you would need the boat to sail at speed already heeling to windward. Perhaps they plan to fill up the tank to lee, then tack or gybe. And shifting 250kg from side to side in a few seconds would take a lot of power. Perhaps they plan to pump a bit more slowly, while depowering as much as needed, then tack or gybe, then finish pumping. Or perhaps the ballast is only needed to heel to windward while getting up on the foils, and from there on, the weight of the boat and payload is enough. They don't explain those details.

I don't understand at all what is supposed to make that concept more suitable for cargo transport than supporting the weight by buoyancy. I would have thought supporting the weight on foils is only worth the bother for light weights that should spend little time in transit, which fits passengers better than cargo. I expect the lift to drag ratio of a container ship or a large tanker is hard to beat, so I don't know what foils offer unless time in transit is critical, and then air transport has advantages, at least over long distances. Even taking environmental impact into account does not obviously favour hydrofoils. I expect that the cargo capacity of V-Rex is less than that of existing displacement hulls, which would mean more vessels, and more risk of collision with wildlife. Even total noise pollution might not be less. Those foils are not totally silent. The spectrum might shift.

I think the concept is interesting. I would like to see it sail. I am not persuaded that it has potential as a cargo carrier.
Top

I fully agree with your analysis Robert. Selecting a viable configuration is a critical part of developing a record breaking sailing craft, but in terms of time and effort it is almost insignificant by comparison to all the detailed work to get a craft on the water and working as intended. This proposal clearly has a long way to go. As for novelty, SailRocket has a small horizontal trimable aerofoil extending from the cross beam beyond the base of the main aerofoil and this is used to fine trim the flying height of the leeward float. I dont think Paul Larsen claims that this aerofoil works in ground effect, but guessing the scale of the V-Rex pictures, its height above the water surface is probably as low or lower.
Top
Post Reply
2 posts • Page 1 of 1